Jordan is a Ph.D. Chemist, turned artist based in Nashville, Tennessee. What started out as a way to relax in his leisure time, after working in the lab, quickly grew into his passion. He has worked with Strathmore, Princeton Brushes, Columbia Records, Disney Plus, Sktchy, and an album cover for DSmoke (grammy nominated artist).

Art has always been a part of his life since Jordan was a child, but it took a backseat throughout the years. That was until his third year of graduate school.

He began posting artwork on Instagram during the summer of 2017 and since then has developed an online presence which led to several unexpected opportunities. “My wife basically forced me to make an account, and over time it began to really attract attention. Needless to say she was right, as usual. I am grateful for all the support and opportunities that have been the direct result.” He recently began accepting freelance work and plans to further pursue other artistic endeavors.

Jordan’s work primarily focuses on portraiture, although he is interested in continually exploring new ideas and subject matter. He works primarily in traditional water-based media such as gouache and watercolor. One of his goals is to help others realize that is never too late to pursue their artistic dreams, no matter where they come from or when they started.

“In order to see more consistent improvement, a more reliable fuel must be used in addition to inspiration, and that is establishing a routine. When I was starting off, I gave myself easy weekly challenges with a specific subject matter that I would complete around the same time every day. By having my subject matter already predetermined and time set aside to work, all there was left to do was draw.” 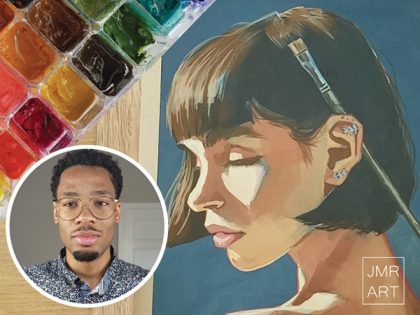