Why is shape language so important? 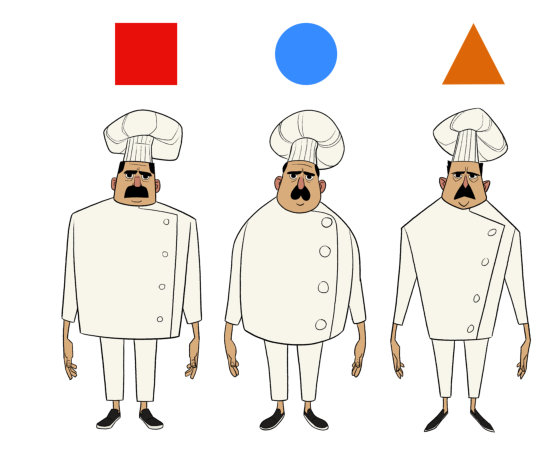 Many times when designing characters, it is easy to overlook the basic foundations of a good design. To ensure a character is easily understood by its audience, however, it is important to consider the shape language of your characters.

There are three main shapes that are in all characters: circles, squares, and triangles. These shapes determine how your character will be perceived by your audience. So making sure you use the correct shapes is incredibly important to the success of your designs. Let’s break down the three shapes and what they will mean for your characters.

Characters that incorporate more circular shapes are often seen as approachable, cute, friendly, and harmless. You will often see circles used in the designs of protagonists, maternal caregivers, young children, and pets, signifying to the audience that these characters are kind and trustworthy.

Square shapes in a character’s design are used to signify that a character is strong, sturdy, reliable, supportive, and stubborn. This is why these shapes are also often seen in protagonists, paternal caregivers, protectors, and any other characters that provide a supportive role.

It is important to note that a character can also include a combination of these shapes. For example, maybe you are creating a character that has an intimidating square silhouette but a circular chubby face to make them feel more approachable. Shape language can be incorporated into all elements of a design from the character’s body shape to the details on their clothing, props, etc., and the more you utilize these shapes the better your audience will understand your characters.

So from now on when you sit down to design a new character, take a minute to think about what shape will best fit their personality.

To learn more about shape language, check out some great artists’ experiences with designing with shapes like Randy Bishop’s chapter in 21 Draw’s The Character Designer.

Rhea is an Australian concept artist who is currently studying at Griffith University. She is passionate about spreading her love of art to others.